The right to water to satisfy basic human needs for personal and domestic uses has been protected under international Human rights law.  When incorporated in national legal frameworks, this right is articulated to other water rights within the broader body of water law.

The human right to water is recognized in international law through an expansive collection of international instruments, which include the South African constitution, human rights treaties, United Nations Declarations and court judgements in Israel and South Africa, among others.  The principal treaty that recognizes the human right to water is the International Covenant on Economic Social and Cultural Rights.  The committee that monitors the activities and interprets the treaty, the United Nations Committee on Economic, Social and Cultural Rights introduced Comment 15 in 2002.  The Comment declares the following at para. 2:

The legal bases of the right to water:

Syrian Refugees in Turkey: View of a corridor of one of the tent camps for
Kobane refugees in Suruç. (From syrianrefugees.eu) 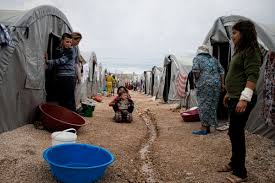 The responsibility to ensure the provision of clean potable water falls upon national governments.  For instance Comment 15 makes the following finding in its para. 1:

Water is a limited natural resource and a public good fundamental for life and health. The human right to water is indispensable for leading a life in human dignity. It is a prerequisite for the realization of other human rights.  The Committee has been confronted continually with the widespread denial of the right to water in developing as well as developed countries.  Over one billion persons lack access to a basic water supply, while several billion do not have access to adequate sanitation, which is the primary cause of water contamination and diseases linked to water.  [Footnote omitted].  The continuing contamination, depletion and unequal distribution of water is exacerbating existing poverty. States parties have to adopt effective measures to realize, without discrimination, the right to water, as set out in this general comment.

If countries who seek to adopt Comment 15 (Israel has already), they will likely put their citizens ahead of anyone else, including refugees.  In many cases governments, e.g., The Hashemite Kingdom of Jordan, will lack the water resources to take care of their citizens, how then are they to provide water to refugees.  As of mid-June 2015, the Office of the United Nations High Commissioner for Refugees, puts the number of Syrian refugees in Jordan at 629,128 people.  With its lack of potable water and poverty problems, how is Jordan supposed to cope with its embrace of a growing refugee problem and the human rights issues that are associated with this population’s basic needs.